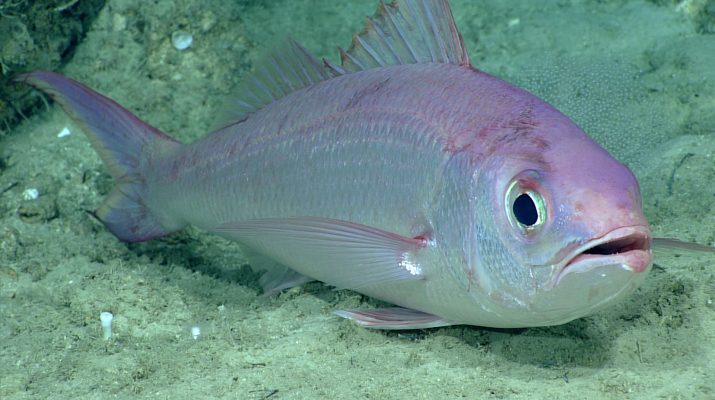 Between October 30 and November 20, 2018, the National Oceanic and Atmospheric Administration (NOAA) and partners conducted a 22-day telepresence-enabled expedition on NOAA Ship Okeanos Explorer to collect critical baseline information about unknown and poorly understood deep-water areas surrounding Puerto Rico and the U.S. Virgin Islands. The goal of the Océano Profundo 2018 expedition was to use remotely operated vehicle (ROV) dives in combination with mapping operations to increase our understanding of deep-sea ecosystems of this poorly studied region, as well as to provide a foundation of publicly-accessible data to spur further exploration, research, and management activities.

Using NOAA’s dual-body ROV the expedition completed 19 successful dives ranging in depth from 250 to 5,000 m to explore a wide diversity of habitats and geological features, including deep-sea fish habitats, deep-sea coral and sponge communities, midwater habitats, submarine canyons, submarine landslides, and more. Midwater explorations at depths ranging from 300 to 900 m were also conducted during two dives to investigate the diversity and abundance of the largely unknown pelagic fauna of the region. Overall, hundreds of different species were observed, including several potentially undescribed species and several range extensions. Throughout the expedition, 81 biological samples were collected (39 primary and 42 associated taxa), 19 of which represent either range expansions or potential new species. The remainder of the biological samples were collected to support studies on connectivity and biogeographic patterns across the Atlantic Ocean.

Six high-density communities of deepsea corals and sponges were documented during the expedition. Commercially important deep-water fish species were documented on six dives, including a sighting of the queen snapper (Etelis oculatus) at a record depth of 539 m. Other noteworthy ROV observations included a translucent egg case with a catshark embryo actively swimming inside, first-time documentation of several species of deep-sea urchins feeding, and documentation of three species of sea stars that are likely new to science. Additionally, the expedition investigated diverse geological features, including two large submarine landslides, one of which is believed to have caused the large tsunami of 1918. Eight rock samples were collected for geochemical composition analyses and age-dating to increase our understanding of the geological context of this region. In addition to ROV dives, the expedition also included mapping operations using four different sonar systems (multibeam, single beam, sub-bottom profiler and ADCP). Over 14,959 km2 of seafloor were mapped over the course of the expedition, including areas around Mona Island, Saba Valley, and Engaño Canyon that had never before been mapped using high-resolution sonars.

All 14.2 TB of data collected during the expedition, including video and environmental data collected on every ROV dive, mapping data, oceanographic and meteorological data, will be made publicly available through national archives in the coming months. Highlight images, videos and description of the accomplishments of the expedition, as well as educational materials, are already available via the expedition website. A total of 63 scientists, managers, and students from 37 institutions in seven countries participated in the expedition as members of the science team through telepresence.