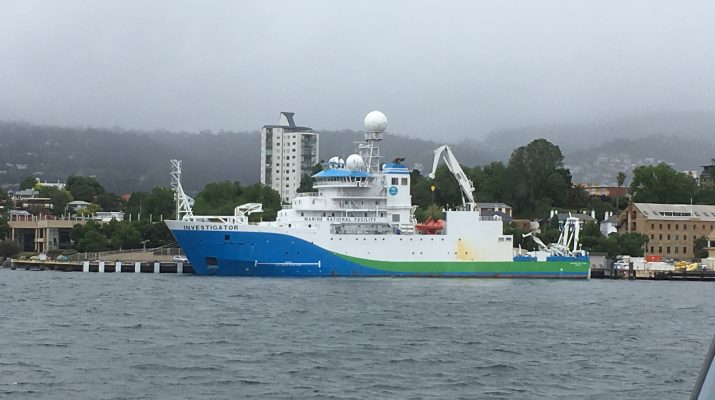 The Tasmanian Seamounts form a cluster of extinct underwater volcanoes to the south of Tasmania (Australia). Due to the uplifted topography of seamounts, marine currents are locally enhanced, which allows suspension feeders to dominate the seamount benthos by making use of the increased nutrient availability. One particularly abundant species of coral (Solenosmilia variabilis) forms dense reefs that offer shelter to many benthic invertebrates. Despite the high and largely understudied biodiversity recorded on these seamounts, some were subjected to heavy trawling for the orange roughy (Hoplostethus atlanticus) between 1987 until 1999, after which this area became the world’s first deep-water marine park. However, due to the slow growth rate of Solenosmilia, the coral communities have probably not yet recovered from trawling impacts.

In order to assess the status and recovery of deep-sea coral communities on Tasmanian seamounts, a team led by Alan Williams (Commonwealth Scientific and Industrial Research Organisation, CSIRO), assisted by Malcolm Clark and Thomas Schlacher, organised a deep-sea voyage on the RV Investigator (23.11.18- 19.12.18). The distributional extent, habitat associations, composition, biodiversity, and biological traits of deepsea coral and associated fish communities off Tasmania will be determined and mapped using towed camera surveys, baited video imagery, water chemistry and biological collections. A unique aspect of this survey is that post-trawling data are available from previous surveys that started 20 years ago. Thus this voyage will provide a comparative framework and a robust set of empirical data on conservation status, resilience and recovery potential to enhance management and conservation of deep-sea coral habitats in Australia. Finally, these results will have international relevance to understanding and managing fishing impact on comparable deep-sea coral communities.

For more information on the survey: https://www.nespmarine.edu.au/seamounts/landing-page