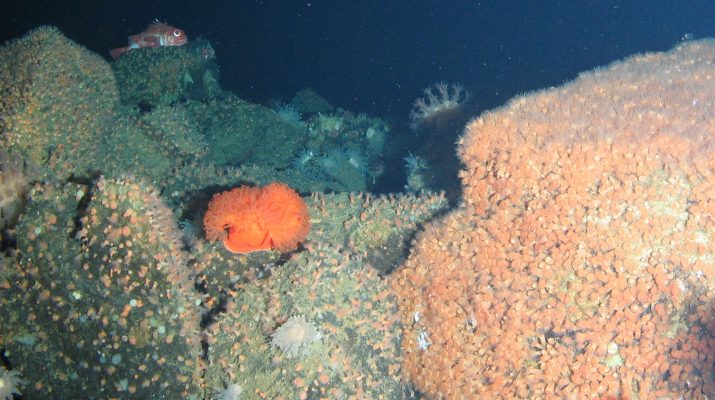 Multidisciplinary exploration of the chemosynthesis-based communities in the Bering Sea during the 82nd Cruise of RV Akademik M.A. Lavrentyev

Reducing environments are widely distributed across the world’s oceans at different depths and latitudes in various geological settings. However, until now there has been no evidence of reducing biotopes in as large a region as the Bering Sea, with exception of the Piip’s Volcano in the south-western basin corner. Nevertheless, occasional records of empty valves of chemosymbiotrophic bivalves, solemyids and vesicomyids on the continental slope of the Bering Sea indicated the existence of reducing environments.

On 2 June 2018 a multidisciplinary expedition onboard RV Akademik M.A. Lavrentyev, conducted by the A.V. Zhirmunsky National Scientific Center of Marine Biology, set out for a 1.5-month cruise to discover and explore unknown or poorly-known chemosynthesisbased communities of the Bering Sea (Fig. 1).

The primary objectives of the expedition were to survey areas with potential reducing conditions in the Bering Sea, including hydrothermal vents and cold seeps, to study their geological settings and chemical composition of fluids, and to explore the composition and structure of chemosynthesis-based communities hosted by reducing environments.

The main tool for the exploration of these chemosynthetic ecosystems was the ROV Comanche 1. A total of 21 ROV dives were completed between 356 to 3931m depth. Biological and geological samples were collected and more than 32 hours of video footage were recorded. Additionally, water samples were taken at different water depths for the identification of methane content and various chemical parameters and plankton samples.

The expedition also studied the distribution of macro and mega-benthos on the southern slope of the Vulkanologov Massif (south-west Bering Sea) between 475 to 3931m depth. The most characteristic features of bathymetric distribution were the presence of dense populations of benthopelagic Trachymedusae at the depth of about 2600 m, massive aggregations of the acorn worms Enteropneusta (fam. Torquaratoridae) at the depth of about 1900 m (Fig. 2), and glass sponge reefs inhabited by rich and diverse fauna at depths of 1010-1760 m. We contributed to the knowledge on composition and functioning of previously recorded hydrothermal communities of the Piip’s Volcano (Figs. 3-5).

However, one of the main results of the expedition was the discovery of a new seep region on the Chukotka slope of the Bering Sea between 400-700 m. Five seep sites were located. They could be divided into three types by depth of occurrence and the composition of background fauna. The seep specialist, bivalve Calyptogena pacifica (Pliocardiinae) was present in communities of all three types (Fig. 6).

Chemosynthesis-based communities on the Chukotka slope of the Bering Sea are the northern-most of their kind in he Pacific, and the Chukotka population of Calyptogena is the northern-most Recent population of pliocardiines in the World Ocean. There is reason to believe that reducing communities on the slope of the Bering Sea are distributed much wider than currently documented, and further research efforts will result in discovery of more northern areas with reducing environments.