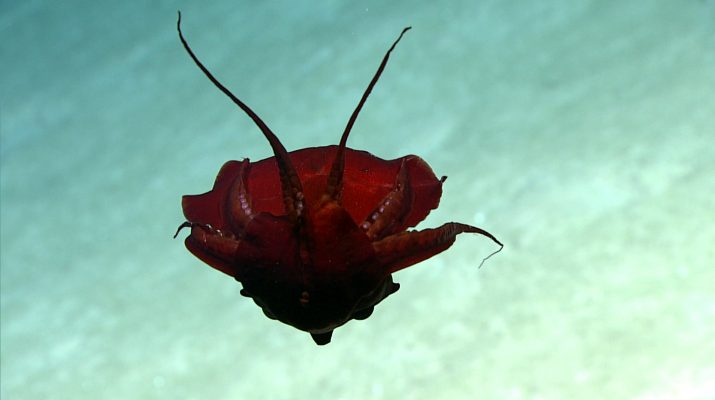 Written by: Amy Bowman, Communications and Public Relations, CollabraLink Technologies, in support of NOAA’s Office of Ocean Exploration and Research

Between November 2017 and May 2018, the U.S. National Oceanic and Atmospheric Administration (NOAA) conducted three expeditions to explore unknown and poorly known deep-sea areas in the U.S. Gulf of Mexico (Figure 1). Expeditions aboard NOAA Ship Okeanos Explorer are live-streamed through telepresence technology. The ship’s ROV Deep Discoverer and camera sled Seirios work in tandem to provide high-resolution imagery, allowing shore-based scientists and managers to participate in the dives, communicate directly with the ship-based team, and help direct operations. The collaborative on-ship and on-shore team determines the location and purpose of ROV dives, which samples should be considered for collection, and the choice of imagery needed to maximize observations. However, the expeditions are not just for scientists. Educators, students and people with an interest in exploration also have extensive opportunities to connect to the missions via the live video feeds in near real-time through the Internet. This provides a front row seat to exploration activities and discoveries as they are made. In addition, the ship conducts live telepresence interactions with various groups, including aquaria, academic institutions, museums, and more. The Gulf of Mexico expeditions provided 22 of these opportunities, reaching hundreds of people in the U.S. and beyond.

The first expedition, Gulf of Mexico 2017, conducted 17 ROV dives at depths ranging from 300 to 2,321 meters and included midwater exploration in depths ranging from 300 to 1,000 meters. Hundreds of different species were observed, including several potentially undescribed species and several significant range extensions. Some organisms were being observed alive for the first time. Throughout the expedition, 105 biological samples were collected (32 primary and 73 associated and commensal taxa), some of which may be undescribed species. At least nine high-density and high-diversity coral (Figure 3) and sponge communities were documented and at least 20 previously unknown chemosynthetic habitats were discovered. Eight rock samples and one sediment sample were collected for geochemical composition analysis and age dating. One ROV dive surveyed the wreck of an early 19th-century copper-clad merchant vessel. More than 26,000 km2 of seafloor were mapped during the course of the expedition. A total of 82 scientists from 42 institutions in four countries participated in this expedition via telepresence technology.

The second expedition, Gulf of Mexico Technology Demonstration, conducted three emerging technology demonstrations, something that Okeanos Explorer had not done before. The first, working in partnership with the Cooperative Institute for Ocean Exploration, Research & Technology, used a new midwater profiler system to study the midwater communities in low-light environments (Figure 4). The second, in partnership with the Naval Undersea Warfare Center, deployed an Instrumented Tow Cable with novel temperature profiling capability to collect temperature and acoustic data throughout the water column. The third, in partnership with the Center for Coastal and Ocean Mapping at the University of New Hampshire, tested two new Simrad EK80 split beam sonars for their ability to detect seeps in conjunction with the Okeanos Explorer’s multibeam and EK60 sonars.

The third expedition, Gulf of Mexico 2018, conducted 15 ROV dives that ranged in depth from 305 to 3,010 m, and included midwater exploration ranging in depth from 300 to 2,100 m. As on the previous ROV-expedition, hundreds of species were observed, including first-time in situ observations of some species and previously unseen behaviors of others (Figure 5); several significant range extensions were also documented. Sixty-seven biological samples were collected during the expedition (22 primary and 45 associated and commensal taxa), some of which may be undescribed species. At least five high-density communities of deep-sea corals were documented, including one at ~2,600 m, the deepest known from the Gulf of Mexico, and two previously unknown chemosynthetic habitats were discovered. Twelve rock samples were collected for geochemical composition analysis and age dating. The expedition surveyed two previously unexplored shipwrecks (Figure 6), producing 3D photogrammetry of both sites. Over 21,100 km2 of seafloor were mapped and 85 scientists from 35 institutions in six countries participated remotely in this expedition via telepresence technology.

Altogether, the three expeditions collected more than 24 terabytes of data, including video and still imagery, multibeam sonar and single beam echosounder measurements, subbottom profiles, current profiles, CTD and dissolved oxygen measurements, and surface oceanographic and meteorological information. All data and samples will be made publicly available through national archives.

NOAA works with partners to identify priority areas for exploration, support innovations in exploration tools and capabilities, and encourage the next generation of ocean explorers, scientists, and engineers to pursue careers in ocean exploration and related fields. The data and information collected during these expeditions, along with other research funded by NOAA, give resource managers, the academic community, and the private sector the information they need to identify, understand, and manage ocean resources for this and future generations. The next ROV expedition, Windows to the Deep 2018: Exploration of the Southeast U.S. Continental Margin, begins on June 11, 2018, and we invite you to join us. Please visit our website for more information.

One thought on “Deep-sea Exploration of the U.S. Gulf of Mexico with NOAA Ship Okeanos Explorer”