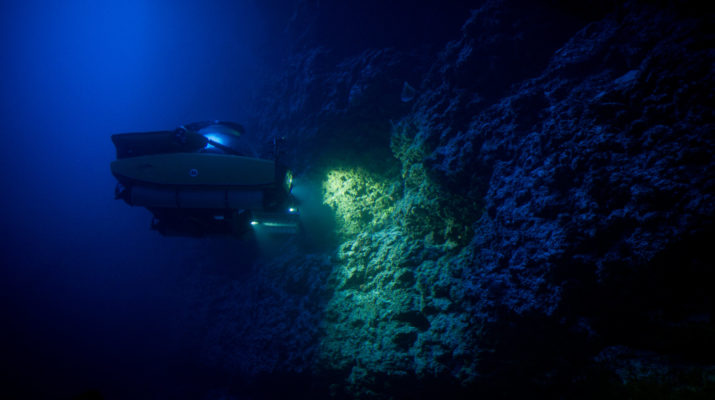 New deep-sea discoveries from The Bahamas

Director of the Cape Eleuthera Institute, The Bahamas

The Cape Eleuthera Institute (CEI) in The Bahamas has been a hive of deep-sea activity in 2019. Two research cruises with OceanX onboard the Alucia have been documenting deep-sea fauna of the Exuma Sound basin down to 1,000 m using their two submersibles. Previous multibeam mapping allowed us to make the most of sub-time to systematically survey the benthic communities associated with the steep rocky drop-offs and sedimented ledges on our doorstep. Large deposits of seagrass detritus were discovered on the slopes, suggesting a substantial input of carbon into this non-continental canyon system. We are currently in the process of analysing video footage and working up samples, including a probable new species of cirolanid isopod.


Night dives on the cruises were used to study the behaviour of bluntnose sixgill sharks (Hexanchus griseus), with the ultimate goal of deploying a satellite tag to characterise movement at depth of this poorly studied species. These sharks migrate into shallower water at night, bringing them within reach of the submersible. The team had developed a modified spear gun system to deploy the tag and after multiple failed attempts (including a grouper that tagged itself after swimming into the speargun), a shark was finally tagged on the very last dive of the cruise. To our knowledge this is the first time that a satellite tag has been deployed from a manned submersible at depth. We await results from the 3 month tag deployment.

In addition to working with the Alucia, CEI researcher Dr Nathan Robinson accompanied Dr Edith Widder and Dr Sönke Johnsen on a research cruise to the Gulf of Mexico to study mid-water fauna. After analysing >120 hours of video footage from the MEDUSA camera system, he spotted something truly remarkable: a giant squid (Architeuthis dux). This footage represents only the second time that these animals have been filmed alive in their natural habitat. Dr Widder is a long-term collaborator of the Cape Eleuthera Institute and has graciously donated the MEDUSA system to our institution. We hope to make many more discoveries in the near future.

We are ideally placed to access the deep-sea habitats of The Bahamas, which hosts one of the most remarkable canyon systems in the world, with some of the steepest slopes plunging ~4,000 m down. If you would like to work with us in the future, please get in touch.

For more information on our deep-sea research please contact Nick Higgs (nickhiggs@ceibahamas.org), Director of the Cape Eleuthera Institute, The Bahamas or see our highlights video: vimeo.com/321287408