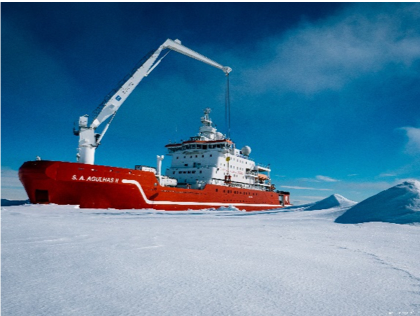 At the start of January 2019, an international and multidisciplinary group of explorers and researchers were congregating at Penguin Bukta, Antarctica. All coming together to participate on the Weddell Sea Expedition 2019 (WSE, the “Expedition”) during a window of opportunity delivered by a particularly mild austral summer.

The WSE was supported by the Flotilla Foundation. The Expedition had two main objectives: (1) scientific study of the Weddell Sea including, by example, environments of the Larsen C ice shelf on the eastern coast of the Antarctic Peninsula (AP) and where iceberg calving is active; and (2) deep-sea exploration in search of Sir Ernest Shackleton’s ship, Endurance, used in the Imperial Trans-Antarctic Expedition (1914‒1916) and last seen November 1915.

The Weddell Sea is a harsh and foreboding environment with changing sea-ice and strong floes dominating western and central areas; the South African icebreaker and research vessel SA Agulhas II (Figure 1) was chartered.

Authors herein formed the WSE Marine Biology Team (MBT). Our main aim was to explore environments and document communities near the Larsen C ice shelf and site of the July 2017 calving of iceberg A-68. Critical to advancing our work, and both Expedition objectives, was the deployment of submarine capabilities to survey at depth and distance. Autonomous underwater vehicles (AUVs) and a remotely operated vehicle (ROV – “Lassie”) were supplied and operated by Ocean Infinity and Eclipse Group, respectively, and with ultra-deep, marine-survey specialists from Deep Ocean Search (see Figure 2).

On the 14th January, employing Lassie, the first transects of seafloor close to Larsen C were completed. Further transects were conducted from 20th‒23rd January. Lines were all ~750 m long and depths were either ~250 m or ~400 m. Challenges to video surveying varied between locations due to sea ice, icebergs, floes, marine snow, and currents. One site showed evidence of iceberg scouring, some 2‒3 m in depth and 5‒8 m wide. All sites studied by the MBT showed evidence of deep-sea life. Examples (indicative) are given in Figure 3.

On the 22nd February 2019 the Expedition came to an end. Scientists and further WSE members were demobilised from Wolf’s Fang to Cape Town. It remains just a short interval since, and the MBT is continuing to work data and samples. Expectations are for the MBT to share findings on the deep-sea life of the Weddell Sea, and publish on all aspects of its work there in due course.

Authors would like to thank all those involved in the WSE 2019 (especially Prof. Alex Rogers), and the NERC DTP.