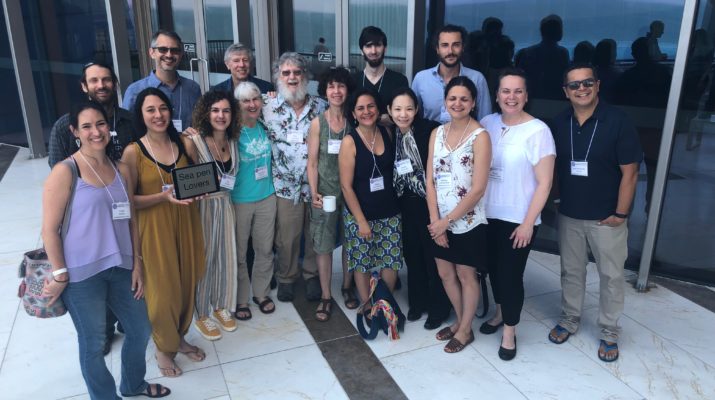 Yellow. The Colombian winter is yellow. As if you could determine a single color to a single season. To a single region!

At the historical city of Cartagena das Indias there are rushing yellow cabs at the place where ‘corre la suave’ (the local coastal expression for slow mode). On the 29th July, world experts started arriving on the sunny and bright coast of the historical city of Cartagena das Indias for the 7th International Symposium on Deep-Sea Corals (ISDSC7), the first time in Latin America! Many already knew each other, others never met. I knew some of the leading scientists only from scientific papers. Some from past collaborations by email or from the chat room of NOAA Okeanos explorer. But I wanted to know more: What is their motivation? Is it the mystery of the deep sea? The intricate adaptations of a coral colony? My curiosity was limitless because as there are very few opportunities where you can gather so much deep-sea expertise in the same place and time.

The symposium has started. I have crossed one Atlantic and a half from the Azores, passing through the European mainland, to Colombia. Through the historical warm city center I could almost listen to Patti Smith ‘When suddenly Johnny gets the feeling he’s being surrounded by Horses, horses, horses, horses Coming in all directions White shining…”. This busy city life could made me travel in time with its warm architecture, music and decoration. Balconies, plants, tourism and color. Ceviches and limonades.

The ISDSC7 was launched with a show by the band Conriche whose music combined indigenous, African and European elements reflecting the diversity and multiple lines of ancestry of the region.

On a fast forward abstract of my experience, I have seen for the first time Prof. Dr. Marco Taviani, where he opened the symposium with the Mediterranean deep-sea corals and the importance of protecting their origin, their ‘mom’. Dr. Di Tracey speaking about a decade of research on deep-sea corals of New Zealand. Dr. Tina Molodtsova on deep-sea mining and the geological and biological resources fragility of this environment. Dr. Nadia Santodomingo revealing the deep-sea research made so far in Colombia. Dr. Andrea Quattrini giving a keynote talk on how important it is to delimit species for further ecological and genomic research. Prof. Dr. Catherine McFadden presenting the phylogenetic tree of Cnidaria based on extremely conserved elements shared among genomes (UCEs) with a fossil clock.

Later on but not ‘suave’ was the speed date organised by the DSBS where the students were able to meet with leading researchers. There were many round tables and a relaxed environment where we felt free to ask and listen to anything. We spoke about careers, aims, achievements, challenges, mental diseases in academia, conciliation of family with an academic career, or even how to deal with losses of expensive deep-sea gear. And then Dr. Philip Alderslade, a leading octocoral taxonomist, asked about our interest for octocoral taxonomy. He offered a whole bunch of genera for the new generation of taxonomists in a single poster. A clear statement about the amount of work needed to do on this discipline and on the limited time people are actually doing it nowadays.

The DSBS travel grant I won and, more recently, the ITC conference grant of the Cost Action Ocean Governance, gave me the opportunity to raise a question to this deep-sea research community. ‘Are museums plummy or
octocorals mummies?’ Should we forget 300 years of deep-sea research stored at natural history museums or should we use it as an incredible source of baseline data for further biodiversity research? Should we consider the octocoral specimens stored there as the next generation of deep-sea Egyptians or use them to raise new species hypotheses on an unknown gigantic area as the deep sea? Despite my fear of stages I felt comfortable and was supported by all the incredible researchers present at Cartagena das Indias.

Moreover, I was surprised with the fact that there are more young deep-sea researchers truly willing to follow up on octocoral taxonomy. Some of the young researchers that I met are Raissa Hogan on sea pens, Candice Untiedt
on Chrysogorgia, Bárbara Moura Neves on Neptheidae and Steve Auscavitch and many more on Plexauridae. Here I make a statement that we will join global forces. But will we be supported in the future?
Personally, I have started with the Swiftia, which had an incredible timing during the Systematics and Evolution session, by being the topic of three distinct talks. In the end, many researchers have agreed with me that Gabriel García Márquez’s quote ‘La sabiduría nos leg candy ya no nos serve de nada.’ (‘Knowledge arrives when we already do not need it’) has to be contradicted on octocoral taxonomy.

This whole experience was so so good that is hard to reflect in plain words. The ISDSC7 was the best symposium I have been at during my young research career! Its inclusiveness was not only at the research level, but it also transcended to personal life as well, as entire families were able to attend the conference due to on-site daycare facilities.

The final event was not an exception. The organiser Dr. Santiago Herrera has mentioned the importance of a multidisciplinary approach to study deep-sea ecosystems formed by corals including octocorals and sponges. A dance brought up history, slavery, social overcoming with emotion and strength. Tired but with a full heart we ended up on the final dinner and drinks. Surely aware that this was the event where a bright yellow bridge was laid on octocoral research through whole oceanic basins. We are here to dive deeper in a yellow submarine into their role at the deep sea.

I am utterly thankful to the organisers Dr. Juan Sánchez, Dr. Luisa Dueñas and Dr. Santiago Herrera for creating such a fantastic event in their own country.