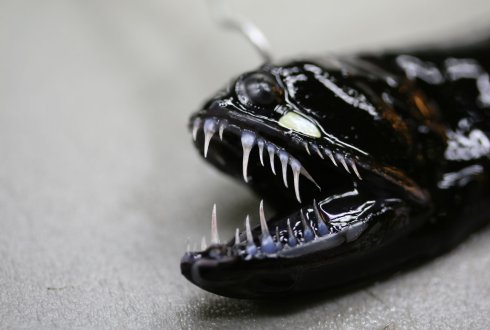 Researchers from Wageningen Marine Research and the pelagic fisheries sector have jointly published a photo ID guide for deep-sea fish species. The guide contains photographs of nearly 100 fish species and 10 cephalopod species from the mesopelagic zone, which is between 200 and 1,000 meters in depth, in the north-eastern regions of the Atlantic Ocean. It helps fishermen and researchers on fishing vessels improve their identification of these species and their understanding of underwater life in the ocean depths.

In the 1990s, researcher Bram Couperus of Wageningen Marine Research began collecting deep sea species as an on-board observer on pelagic trawlers. He was fascinated by dragon fish with large needle-like teeth, deep-sea sharks, luminous lantern fish, and other species that ended up in the net as by-catch.

As part of the annual scientific survey of blue whiting, a colleague researcher, Sytse Ybema, began working on a determination guide with the aim of facilitating future research into special by-catch species. Since 2008, the species have been photographed as a standard procedure during the blue whiting surveys. Couperus is especially enthusiastic about the efforts of all researchers and trainees involved: “Their photography and identification skills have enabled us to publish this determination manual”.

The value of the photo guide

According to Martin Pastoors, Chief Science Officer at the Pelagic Freezer-trawler Association (PFA), the manual provides important added value for crew members of pelagic trawlers in the North-eastern Atlantic. “This is because special species can now be compared with actual photographs of previously caught specimens instead of with beautifully drawn illustrations from popular market books,” he says. “And the guide makes it easier for fishery researchers to study this group of species. Until now, they have been entirely dependent on scientific determination collections that were difficult to access”.

The manual was compiled as a draft version by Bas Schilling, a student at Van Hall Larenstein University of Applied Sciences, and was subsequently completed by researchers at Wageningen Marine Research. It is also available as a PDF.