Dear Colleagues – you may wish to support this action. Please contact Aaron Kornbluth directly with any queries or comments: akornbluth@pewtrusts.org

The United States Mid-Atlantic Fishery Management Council, which manages federal waters from New York State to North Carolina and out to the edge of the Exclusive Economic Zone (see map below), is considering agroundbreaking action to protect deep-sea corals and their habitats from destructive bottom fishing. If the strongest conservation alternatives are adopted, the plan will represent the second-largest such protected area in the entire Atlantic Ocean (only the Charlie-Gibbs South MPA in the North Atlantic is larger), ensuring that about 39,000 square miles (~100,000 km2) of ocean bottom are off-limits to the impacts of irreversible damage from fishing.

Recent cruises (e.g., aboard the vessels Okeanos Explorer and Nancy Foster) into geologically and biologically unique canyons along the continental shelf by the National Oceanic and Atmospheric Administration and their partners have resulted in exciting discoveries of:

Deep-sea corals and their ecosystems are increasingly recognized as a new frontier in scientific research, from their value as ocean sinks for carbon dioxide to their potential use in biomedical products. Around the world, many similar deep-sea biodiversity hotspots have already been destroyed, and because numerous fish assemblages are expected to shift deeper, away from warming waters, fisheries are expected to follow. The Council’s plan will represent the first use of a new discretionary authority specifically designed to protect deep-sea corals under the Magnuson-Stevens Act, the national law governing fisheries management. The extent to which the plan prioritizes coral conservation will set the course for future actions throughout the nation’s waters, and add to the growing global network of deep-sea protected areas.

Please support this action (before the close of the comment period on 28 January 2015) by the U.S. Mid-Atlantic Fishery Management Council and demonstrate our collective scientific interest in safeguarding these unique, ancient, and little-understood animals. 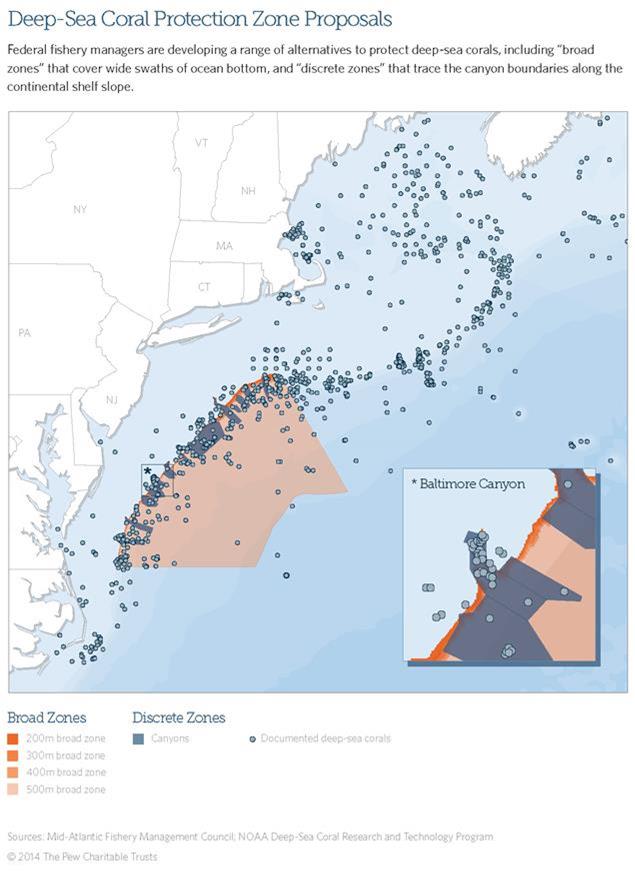