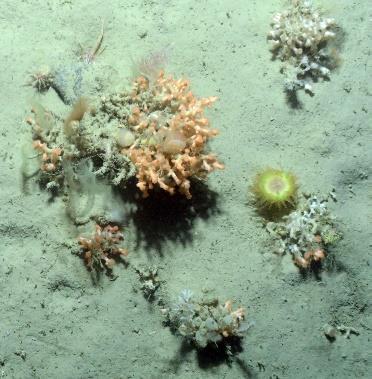 Sedimentation effects from human activities such as seabed mining or bottom trawl fisheries are poorly known, yet are of concern for environmental sustainability of such activities in the deep sea. In 2016 NIWA started research into the effects of sedimentation from such seabed disturbance (“ROBES”-Resilience Of deep-sea Benthic communities to the Effects of Sedimentation) using a combination of field survey experimentation with in situ observations, and laboratory-based experiments (see Deep-Sea Life issue 12, December 2018).

New Zealand came out of a successful Covid-lockdown in late May 2020, and research vessel operations resumed almost immediately. In June we completed the last of a series of three surveys in a seabed disturbance experiment. Disturbance operations occurred in 2018 and 2019 at two different scales. The priority in 2020 was to repeat sampling sites filled in 2018 and 2019 to monitor changes over time, and to evaluate recovery and resilience of the seabed communities.

The survey occurred on the central Chatham Rise, about 250 n.miles east of New Zealand, at depths of 400-500m.

The survey was divided into two discrete parts. The first focussed on repeat sampling of “core” sites from 2018-2019, which included areas that were disturbed, surrounding sites to monitor effects of any sediment plume, and a reference site away from any likely disturbance (Figure 1, left). The second focussed on a small area around a feature termed the “Butterknife” (Figure 1, right).

Sampling occurred at 12 core sites, with towed camera (NIWAs Deep-Towed-Imaging-System (DTIS)) at all, and multicore deployments at seven sites. In addition, DTIS and multicore stations were completed on three iceberg scours in the southwest of the area (to examine long-term disturbance as a contrast to our short-term period), live corals (Figure 2) were collected by beam trawl for sediment-tolerance experimental work back in the laboratory, and Conductivity-Temperature-Depth (CTD) stations were filled over a wider area to provide a broader regional oceanographic context for sediment dispersal. A single current meter -sediment trap mooring was recovered which had been deployed in the 2019 ROBESII voyage. The mooring showed rapid colonisation and growth of hydroids (Figure 2).

The “Butterknife” received extensive sampling, especially with the multicorer, to monitor infaunal responses to both direct disturbance by our previous Benthic Disturber and plough-harrow operations, and indirect from localised dispersal of a sediment cloud. A subset of the Butterknife multicore sites (15 of the 25) was selected for more detailed experimental measurements (oxygen, community respiration, elutriation, sediment erosion) in the onboard laboratories.

The programme currently has a large number of samples and data sets undergoing processing and analysis. Results will hopefully start appearing in the back half of 2021 and early 2022.