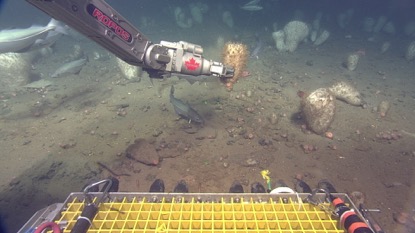 Hats off to this collaboration: SponGES pairs up with Ocean Tracking Network to study unique deep-water sponge

In the summer of 2016, technicians from the Ocean Tracking Network (OTN) discovered a unique species of marine sponge growing on their receiver moorings during a routine service trip of the Halifax Line — OTN’s longest acoustic tracking array, stretching over 200 kilometres from Halifax to the Scotian Shelf break. The species was identified as the Russian hat sponge (Vazella pourtalesii) by Dr. Ellen Kenchington, a research scientist with Fisheries and Oceans Canada (DFO).

Kenchington studies Russian hat sponges through the EU Horizon 2020-funded Deep-Sea Sponge Grounds Ecosystems of the North Atlantic (SponGES) project, a research initiative to improve the preservation and sustainable exploitation of Atlantic marine ecosystems. After discovering the species’ apparent fondness for OTN’s equipment in 2016, samples were collected from moorings over the following year to study their population structure, reproduction, and the genetic kinship between the sponges within and between receiver moorings.

Russian hat sponges create habitats for other species, influencing the abundance of invertebrates and fish in the area by forming three-dimensional structures on the seafloor that fish and crustaceans can find shelter and safety in as well as some food resources. Understanding their distribution and how these sensitive organisms adapt to changing ocean conditions will be vital in their conservation and the preservation of biodiversity in areas where they’re found.

In the summer of 2017, OTN participated in an oceanographic cruise in partnership with DFO and the SponGES project. The eight-day voyage took place aboard the CCG Martha L. Black, sailing from Sydney, Nova Scotia and returning to port at DFO’s Bedford Institute of Oceanography in Dartmouth.

The ship set out to gather information on the Russian hat sponge inside the Emerald Basin and Sambro Bank areas. The areas, known to contain dense populations of Vazella from previous studies, are currently closed to all bottom fishing to protect these extraordinary animals. Sponges were collected from the seafloor using a Remotely Operated Platform for Ocean Science (ROPOS) — a large ROV, the Canadarm of ocean exploration, owned and operated by the not-for-profit Canadian Scientific Submersible Facility (CSSF).

During the cruise, OTN field technician Joe Pratt was on a mission to recover a receiver mooring from the Halifax Line, which was cleared of biofouling Vazella on a previous trip in the prior year. The task proved more difficult than expected aboard the CCG Martha L. Black.

“We had a few issues with the recovery — the station we wanted, mooring 276, was in an area known to be densely populated with Vazella sponges, but the receiver was non-responsive. We tried to grab the one next to it, but we still couldn’t get a signal,” said Pratt. It’s possible the equipment struggled to communicate with the mooring’s acoustic release underwater, likely due to the ship’s underwater engine noise. After several unsuccessful attempts, Pratt boarded a rescue craft where he successfully released and recovered another adjacent mooring about 500 m away. When asked about the overall mission, Pratt was pleased. “Despite the rough seas and difficulties in the field, the whole crew was great to work with. It’s a very interesting project to be a part of.” Recruits of Vazella sponge that settled on the receiver over the year will provide researchers with more accurate measures of the species’ growth rate.