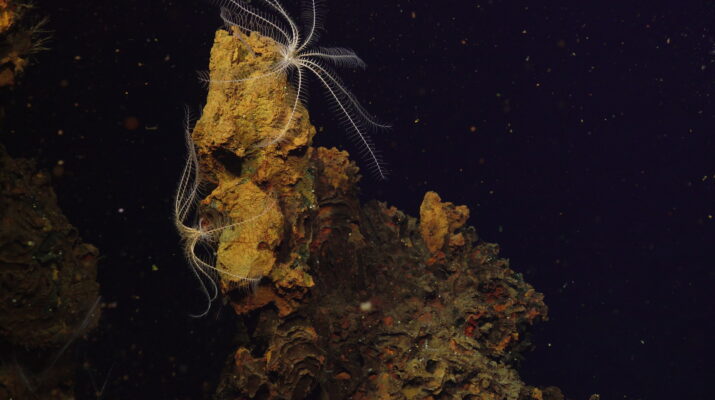 An interdisciplinary team of oceanographers and engineers led by investigators from WHOI, SIO, Rutgers University, Western Washington University, and Lehigh University returned recently from a month-long expedition on R/V Roger Revelle (RR2102) to hydrothermal vents at 9°50’N on the East Pacific Rise. They used deep submergence vehicles AUV Sentry and ROV Jason, paired with shipboard and field experiments, to understand the interplay between geology, microbes, and animals at these dynamic deep-sea oases.

Over the past three decades at this vent field, two massive seafloor eruptions have been observed and their consequences studied. On this recent cruise, the Mullineaux Benthic Ecology Lab from WHOI deployed and recovered colonization surfaces as part of a multi-decadal study on recovery after a massive deep-sea eruption in 2006, which has been featured in two recent publications (Mullineaux et al. 2021, Dykman et al. 2021). Data from the past eleven years of this time series have recently been published online at BCO-DMO and OBIS. Researchers also initiated experiments to understand the role of microbial biofilms in cuing larval settlement (Figure 1), including the shipboard filming of live deep-sea larvae swimming in a pressurized chamber. Combined, these experiments and long-term studies are helping us understand how vent animals disperse between patchy, ephemeral habitat, how their larvae choose where to settle, and how communities recover from massive disturbance.

A major outcome of this cruise was the documentation of inactive sulfide mounds that were discovered by AUV Sentry hundreds of meters away from the axial summit trough. Initial observations indicate that these sulfide mounds are home to a distinct assortment of species that may have different functions than animals at active vents or on the surrounding seabed (Figure 2a). For example, we collected limpets of the genus Neolepetopsis (Figure 2b) from the inactive sulfide mound Sentry Spire. This species had been found as larvae in the plankton but had not been seen as adults on active vents in the 9°50’N area. These new discoveries are critical to our understanding of how nearby yet highly distinct deep-sea habitats contribute to regional faunal diversity and connectivity. This research was funded by NSF grants OCE-BIO-1829773, OCE-BIO-1948580, OCE-BIO-1948623, OCE-MGG-1949485, OCE-MGG-1948936, and OCE-MGG-1949938. Researchers supported by these grants will return to 9°50’N EPR on two more funded cruises in 2022 and 2023.