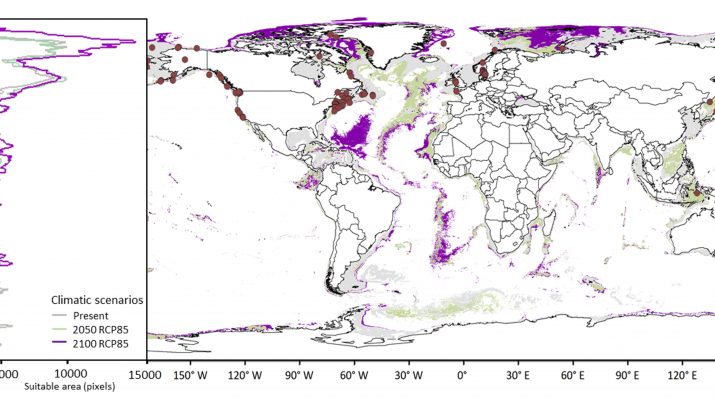 Over the last year we have studied the biodiversity patterns of the shallow and deep-sea fauna of the NW Pacific and Arctic Ocean. In collaboration with researchers from New Zealand (Dr. Mark Costello, University of Auckland) and Senckenberg Biodiversity and Climate Research Centre (Dr. Dan Warren), we analyzed 34,916 distribution records of 17,414 species from 0 – 10,900 m depth, 0 to 90 degrees latitude, and 100 to 180 degrees longitude. This study is an important contribution to the marine science society in order to better understand the biodiversity patterns of shallowwater and deep-sea species, and their driving factors. This is the first time that the biodiversity of the NW Pacific and its adjacent Arctic Ocean have been studied at this scale, and that environmental driving factors were considered. We considered how using different biodiversity indices could change the results and interpolation of the important driving factors in creating the biodiversity gradients. To our knowledge, this is the first time that the biodiversity of the NW Pacific has been studied, including all shallow-water and deep-sea marine species. The results are very important as we show that species richness decreases at the equator and towards the deep sea.

From the dataset built on the NW Pacific and Arctic fauna, we will assess the shift of current suitable habitat for species from the NW Pacific in the face of anthropogenic climate change over the remainder of the century. For this, two projects are being developed with a focus on taxa represented in the NW Pacific fauna that are considered to be efficient invasive species and are reasonably well-sampled geographically: crustaceans (Fig. 1) and bivalves. The dataset includes occurrence records obtained through sampling in the NW Pacific, i.e., the Beneficial project, as well as the Ocean Biogeographic System (OBIS) and Global Biodiversity Information System (GBIF), comprising more than 5 million global records for more than 700 species. The forecast of habitat suitability is based on a machine-learning technique called maximum entropy modeling, where the correlation between a set of environmental grids and georeferenced occurrence localities, generates a model expressing probability distribution of predicted suitability of conditions for the modelled species. In collaboration with researchers in the United States (Marlon Cobos, University of Kansas), we developed robust models calibrated using two distinct environmental datasets, seven feature classes and nine regularization multipliers, resulting on 126 models per species. Model selection was done based on statistical significance, prediction ability, and model complexity. Final model projections were built under three distinct extrapolation settings and evaluated based on overall model variability. Preliminary results indicated multidirectional distributional shifts, but considerate poleward distributional shifts, characterizing the Arctic Ocean as a highly risked habitat considering future climatic scenarios. Moreover, for the first time we provide statistical assessment of environmental variable relevance for each species distribution. The impact of present climate changes on deep-sea biology is limited to a few example species, and the effects on ecosystem functioning and biodiversity remain almost completely unknown. Thus, this study is highly relevant for conservation planning purposes aiding determination of areas of gain, loss and stability of habitat suitability under future climatic scenarios, for shallow-water and deep-sea fauna. Future steps include measuring geographical and environmental suitability centroid shifts of individual species, and investigation of impacts at the community level.