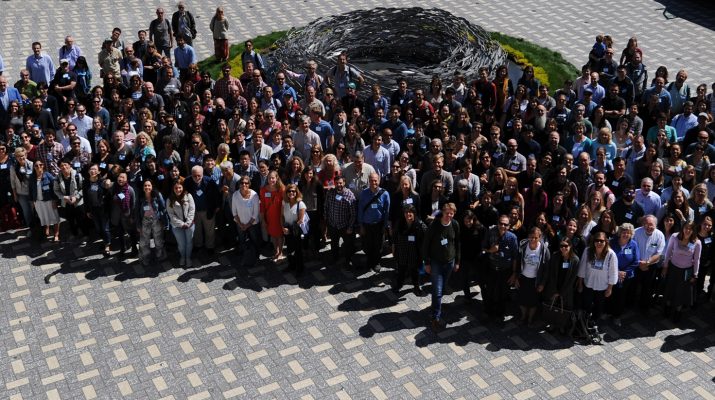 With snow falling in parts of Europe, and even a light frost in London, it gives me great pleasure to write another letter to the members of the Deep-Sea Biology Society, and to wish you all a very happy new year. It seems like a lot has happened since the hot European summer of 2018, where for the Trustees, significant parts of it were spent huddled around video-conferences on our laptops — at strange times of night and day — helping to plan the 15th Deep-Sea Biology Symposium in Monterey.

It was an astonishing achievement for the team, and in particular our local hosts at the Monterey Bay Aquarium Research Institute, who hosted the largest DSBS ever held (405 participants) despite competition with quite a range of other major marine meetings the same week. As with the meeting in Aveiro three years ago, it felt like another leap forward in the growth of our community and the openness of our discipline. Over 300 abstracts were submitted to the meeting, with 172 oral talks (42 by students), 59 lightning talks, and 195 posters (44 by students). Participants hailed from at least 34 countries around the world. The meeting was reported in a range of media, including Nature and The Economist magazines as well as through a very active twitter hashtag #DSBS2018 – where you can still relive the memories if you so desire. You can of course also download the full program and abstracts from our website.

We must thank the leadership of Steve Haddock, George Matsumoto and Mariah Salisbury, with the support of all the local organising committee and the society Trustees for this incredible success.

It is a good joke that the most important thing to do at any meeting is to decide the venue of the next meeting. And this year, we did things slightly differently, and we hope, slightly more openly to allow as many members as possible to have a say. At our Annual General Meeting (AGM) that the Society hosted on the Wednesday evening, we invited prospective bidders to put forward their proposals for the 16th DSBS (to occur in 2021). These bids were also circulated in the form of 2-page proposals to all members, and voting was opened until Friday, including online voting for any members not present at Monterey. We were delighted to announce at the closing ceremony that the winner of this process was the bid led by JAMSTEC in Japan. The runner-up was a strong bid from IFREMER in France. We are all extremely excited to support the 2021 16th Deep-Sea Biology Symposium in Japan – the first time the meeting will have been held in Asia.

One thing the Society is very aware of is the rising cost of attending our international symposia. In the last 6 years, attendance at the main triennial DSBS meeting has almost doubled in size, and we will expect perhaps 500 delegates in 2021. This places increasing burdens on the local organising committees and often a requirement to utilise professional conference facilities, with increased costs. The Society is committed to making the symposia as open as possible to all, and one of the main ways we can do this is through raising sponsorship for travel grants to enable people to attend the meeting. We were able to do this in 2018 for a record 13 participants at the 15th DSBS, and we want to build on this for the next meeting. We are also committed to helping push online participation in the meetings through social media. We would be interested to hear from the membership on other ideas for increasing access to the meeting for those with limited travel funds.

This year, the Annual General Meeting of the Society will be held in conjunction with the 7th International Symposium on Deep-Sea Corals (ISDSC) which will be held in Cartegena, Colombia from 29 July – 2 August 2019. You can already visit the website and propose sessions: https://www.deepseacoral2019.org and we encourage anyone with an interest in deep-sea corals to register. The Society will be sponsoring the meeting with travel awards, student events, the AGM, and discounts for members.

Since my last letter in June 2018, there have been some changes to the oversight of the Society as all of the Trustee positions, including President, were up for re-election at our last AGM in Monterey. I would like to take this opportunity to thank our departing Trustees Holly Bik, Diva Amon, Paul Snelgrove and Rachel Boschen for all of their work over the years.

Re-joining the Trustees in a new role is Moriaki Yasuhara, formerly in a non-executive role, but now as our new Trustee for Conferences supported by the lead of the Local Organising Committee for the 16th DSBS in Japan, Katsunori Fujikura. Also in a new role are Paris Stefanoudis (formerly student lead) who is now in charge of our Communications portfolio, and Erin Easton (formerly non-executive) who is our new Secretary. Our new Student officer is Zoleka Filander and we have now created two new positions in Development (Julia Sigwart) and Early-Career officer (Andrea Quattrini). Moving from the epic job of leading the 15th DSBS in our Conferences position, we are delighted that Steve Haddock now joins our Trustees in a non-executive oversight role, and we are joined by two new non-executive Trustees, Chong Chen and Leigh Marsh.

Staying in the same role are myself as President, Rachel Jeffreys in Awards, Chris Yesson as Treasurer, Santiago Herrera in Membership, and Craig McClain and Malcolm Clark in non-executive Trustee roles. I feel confident that we have an excellent new board of Trustees to serve the membership over the next three years.

As this is now a period of settling in and development of new ideas for our Trustees, I will wait to report on the new plans in our various core areas over the next couple of months. Later this month, we will announce our list of awards and funding opportunities for the 2019 calendar year – so please keep an eye for those on our twitter feed, slack team (join at j.mp/deep-slack ), mailing list and website.