This year, the INCISE submarine canyon symposium took place in Victoria, (British Columbia, Canada). It was the third multidisciplinary meeting of submarine canyon researchers from around the world, being the previous two hosted in Brest (France) and Edinburgh (UK).
Despite the numerous occurrences of submarine canyons in many areas of the world, > 660 submarine canyons globally (de Leo et al. 2010), numerous scientific questions still remain without an answer, but what is surprising is that the general public does not seem to be aware of their existence! Any canyon researcher can agree in the uniqueness of these environments. They are a source of heterogeneity and complexity that makes them very attractive and at the same time hard to understand. The non-scientific community should also know this.
As a benthic ecologist, I’m interested on the physical and geological processes occurring within canyons because I know how much they can influence their fauna. Significant environmental changes occur along canyons due to their morphology and location/surroundings, and the fauna will, of course, follow these patterns. Efforts such as the one in Whittard canyon (Amaro et al. 2016) where a multidisciplinary approach has been used to provide a holistic view of one of the most well-studied canyons to date, are, therefore, particularly necessary in their study.
I make the most of this blog to thank the INCISE organizing committee for making this network possible, the Deep-Sea Biology Society and Ocean Networks Canada for financial help to attend the conference, Ocean Networks Canada for hosting the event and all the participants that made this meeting a very enjoyable one. 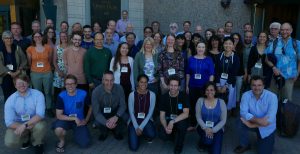