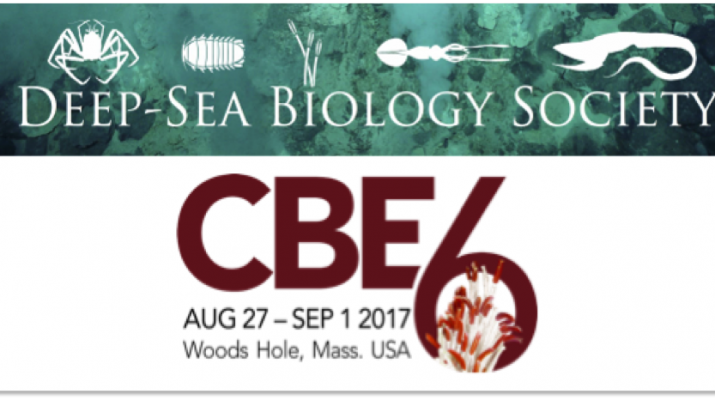 At the CBE6 conference this year, we came together to both celebrate the past 40 years of chemosynthesis discovery and research, and look to the next advances and challenges in the field. The setting for the meeting could not have been more perfect – idyllic Woods Hole, Massachusetts in late August/early September, on the exact campus and in the same building where much of this research has occurred over the past decades, and still occurs today.

The meeting started out on an exceptionally high note, with a Sunday night public lecture by the legendary Bob Ballard in the Lillie Auditorium. True to his reputation, he delivered one of the most riveting talks I’ve ever seen about his history in science, and the discoveries he helped make. The only disappointing part of his presentation was that the video recording of it failed, preventing me from sharing the experience with my family. Following his talk, was a panel discussion with several experts about the next steps in discovering chemosynthetic ecosystems, both on Earth and on other planetary bodies.

The next three days of talks were filled with an exciting range of topics, from ecology to deep sea mining, and time frames, ranging from extant populations to chemosynthetic communities that existed millions of years ago. The conference consisted of a single session without any other co-occurring talks, and the conference organizers accommodated for this deftly by organizing the talks into logical session topics that built on each other.

Following James Childress’ plenary lecture, the first round of student, postdoc, and PI talks that occurred on the second day were largely focused on reporting newly discovered chemosynthetic ecosystems or diversity statistics, both geological and biological. Through these talks, we learned how succession occurred at the 9º N site of the East Pacific Rise following eruption of this spreading center. Fascinatingly, we learned of the recently discovered hybrid methane seep and vent site off of Costa Rica, the only known of its kind. Furthermore, the discoveries reported were not only focused on geologically derived reducing environments, as a couple of fascinating talks were presented on the successional changes that occur on wood falls, as the first wood-boring bivalves arrive and the area surrounding the carbon source becomes chemically reduced. This day concluded with an informative poster session and reception.

The second day of talks largely focused on chemosynthetic symbioses, and were aptly introduced by Jillian Petersen’s plenary on shallow water reducing ecosystems. These talks detailed the common topics in symbiosis – e.g., symbiont identity and localization in host tissues, host-symbiont co-evolution, host-symbiont metabolic coupling, etc. – while also introducing less frequently considered topics. One such example was a study investigating how shallow water lucinid clams impact fisheries, revealing that these sulfur-oxidizing bivalves can comprise substantial proportions of lobster diets in the Bahamas. This day wrapped up with a banquet dinner, which allowed for wonderful conversations about the days’ talks and plans for excursions around the cape.

Following a day off in which meeting attendees explored Cape Cod and the surrounding area, we had our third day of talks, which largely focused on tropic interactions and biogeochemical cycling in chemosynthetic ecosystems, and was introduced in Marie Portail’s plenary. These talks revealed the current state-of-the-art methods for sampling and tracking nutrient flow in some of the world’s most hostile environments, namely under thousands of pounds of pressure on the sea floor. There were also many talks investigating the geological/evolutionary history of chemosynthetic associations through interrogating any remaining chemical or morphological evidence that exists in the fossil record. This last full day of the conference wrapped up with a final poster session and reception, which provided another opportunity for networking and productive interactions among participants.

The final day of CBE6 started off with a plenary talk by Satoshi Mitarai, in which he showed his recent work tracking large-scale larval dispersal patterns between hydrothermal vents across thousands of miles and thousands of years in the western Pacific. The remaining talks in this session continued on this theme, providing life history data on hard to study host larvae, patterns of host-symbiont biogeography, and co-evolutionary interactions.