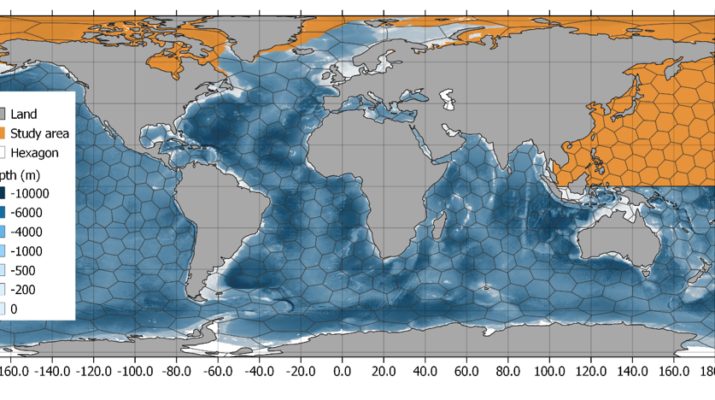 The biodiversity patterns, including species’ composition and distribution range changes, of marine fauna along the NW Pacific and the Arctic Ocean (AO) are still controversial and under-studied. Also, these regions, especially the AO, are reported to warm faster than the other oceans. Whether the species here are expanding their range towards the higher or the lower latitudes as a response to climate change, is also ambiguous. In the Beneficial project (Saeedi and Brandt, 2020; Saeedi et al., 2019a; Saeedi et al., 2019b; Saeedi et al., 2020), we have shed light on the biodiversity patterns and biogeography of a wide range of marine species from the NW Pacific to the adjacent AO, and from shallow water to deep sea. In the extension of the Beneficial project (2020-2021), we will further explore the patterns of biodiversity and biogeography in the AO using data available from OBIS and GBIF, and compare them with the patterns found in the NW Pacific (Figure 1). The main goals of the extension of the Beneficial project are to understand the current patterns of biodiversity and their drivers in the entire AO, and to model future species distribution of key taxa to understand the potential future direction, and expansion or contraction of species spatial ranges.

Specifically, using over 600,000 distribution records of over 19,000 species of the NW Pacific and the AO, we aim to analyze latitudinal and depth gradients in species richness and their compositional change (β-diversity)We will divide the broad study area to 10,000 km2 equal-area hexagonal cells and 5-degree latitudinal bands and will be using Generalized Additive Models (GAMs) and Generalized Linear Models (GLMs) to explore the relationship between the environmental drivers and species richness estimations along the AO in comparison with the NW Pacific. The β-diversity will be decomposed into turnover and nestedness components to shed light on the species compositional change patterns and identify β-diversity breakpoints within and between both oceans.

Furthermore, we aim to explore the distribution of 22 species of corals and 144 species ecologically associated with them. The associated species are selected based on their biological association identified with corals in literature, and their spatial overlap with the coral species. The main focus of these analyses is to explore the current and future distribution of these species in RCP45 and RCP85 IPCC scenarios, using species distribution modelling based on environmental variables including temperature, current velocity and salinity from Bio-ORACLE. We will then compare the maximum latitudinal extent of the species range in the current and future scenarios. The difference would reveal the direction of range shift in these species; also if the species are showing poleward expansion or retraction.