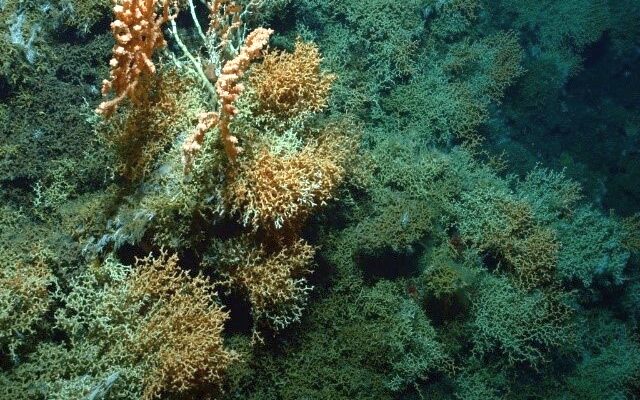 Benthic faunal communities on deep-sea seamount features are commonly characterised by extensive growth of cold-water corals. These are vulnerable to impacts from bottom trawl gear but the overall resilience of such benthic communities, and the time frames required for recolonisation and regrowth, are uncertain (Goode et al. 2020). Such information is important for evaluating appropriate options for management of fishing impacts

On the Chatham Rise east of New Zealand, there are groups of small seamounts in close geographic proximity, of a broadly similar size, depth range, and elevation, and with varying levels of historical fishing effort for orange roughy. These seamounts provide a natural “compare and contrast” setting to evaluate the effects of bottom fishing. Importantly, a number of these features were closed to bottom trawling in 2001, including both fished and unfished features in the Graveyard Seamounts complex (Figure 1). The area was surveyed using towed cameras in 2001, 2006, 2009, 2015 (see Deep Sea Life issue 5 (2015)) and again this year in August 2020. Although the 20-year period is not a long time for such studies, this series now has five time-data points, and affords a rare opportunity to potentially track small and gradual changes in community structure, and thereby understand the underlying spatial and temporal dynamics of community recovery.

The towed camera survey this year adopted the same design as earlier surveys, with eight transects radiating out from the summit to the base on each of the six seamount features. More transects were carried out on “Morgue Seamount”, as this was a heavily fished feature that was protected in 2001 and hence an important site to monitor closely for recovery. Areas of stony coral reef matrix (mainly Solenosmilia variabilis) that remain on Morgue are a combination of areas that were too rough to be trawled, particularly the steep spurs to the NNE and SSW (Figure 2), and small remnant patches on the flanks that were missed by trawling operations (Figure 3). These remnant corals can potentially act as local-scale recolonization sources.

Data from the first four surveys have been analysed in detail and although there were clear differences in overall community composition related to fishing intensity, there were few signs of any potential recovery of stony corals (Clark et al. 2019). These analyses will now be extended by incorporation of data from the latest survey, but  initial observations suggest the only obvious recruiting fauna after 20 years were stylasterid hydrocorals, which were conspicuous both on natural substrata (Figure 4) and on railway wheels that had been deployed as ballast weights for instrument moorings in 2010 (Figure 5). Data from the latest survey will also allow us to focus more on finer-scale patterns in remnant patches, recolonization and settlement and use patch occupancy models to predict the long-term recovery trajectories of disturbed benthic communities on seamounts. The project, funded by Fisheries New Zealand and NIWA, is due for completion in early 2022.