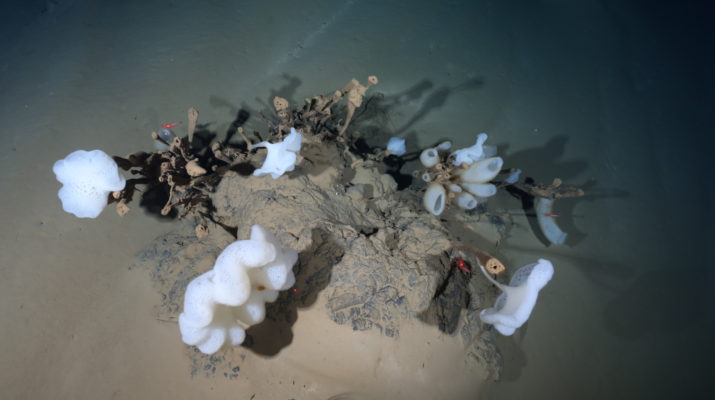 On 19 September, a team of 36 scientists and engineers from 9 research institutions (NIVA, Uni. Tromsø, Uni. Bergen, IMR, WHOI, AWI, Uni. Aveiro and NASA-JPL), together with a writer from National Geographic and film director from Avatar Alliance Foundation, sat sail from Longyearbyen (Svalbard) towards the high Arctic on the Norwegian ice breaker Kronprins Haakon (Fig. 1). On board we had the recently upgraded hybrid ROV/AUV Nereus Under Ice (NUI, WHOI) and the towed ocean floor observation and bathymetry system OFOBS (AWI), as well as a CTD, gravity core, multicore, megacore and plankton net. The aim of the HACON cruise was to investigate the Aurora vent field on the Gakkel Ridge, located at 83.5°N on 4000 m water depth under ice.

The first black smokers ever to be observed in the Arctic were discovered on the Aurora seamount, during the Polarstern expedition PS86 led by Prof Antje Boetius (AWI, Germany). The Gakkel Ridge region, at this time of year, is covered by large ice floes slowly drifting (most of the time at 0.2-0.4 knots) with incredible force.  The ocean temperatures under the ice are below zero and the terrain on the seafloor is complex. All this poses considerable challenges and demands on technology and crew. This was a high-risk, high-gain type of expedition. Anything could go wrong. But any new observations and samples would greatly increase our understanding of these remote ecosystems. And we had it all!

We had technological issues, but these only fuelled new collaborations amongst the engineers from WHOI, AWI and NASA-JPL. So much as to build, from spare parts, a mini, deep-diving ROV that could go down to 4000 m attached on OFOBS, giving OFOBS the capacity to “look” around: Sponge Bob Spare Parts (Fig. 2).

We faced the challenge of non-collaborative ice floes that would drift on top of the Aurora vent site limiting our access to it. But the excellent team on the bridge of the Kronprins Haakon and the cruise lead (with a lot of patience too) found ways of getting us on station when the Aurora vent site “came out” under a large lead of open water or thin ice, so we could operate our deep-diving equipment safely. One of the best days of the cruise was the first dive of the towed OFOBS system  over the vent site. After a very long transect over sedimentary background, we started climbing up a large mound until, to everyone’s excitement and delight, OFOBS flu over a very large black smoker acquiring excellent images of the system (Fig. 3). Several more dives were made over the vent field, providing a unique data set of videos and high-definition photographs from which we could identify at least 2 new black smokers.

We also made several interesting OFOBS dives around the seamount, showing the variety of habitats in the region, including sediment with rocks colonised by sponges (Fig. 4) and associated fauna, sinkholes, basalt rocks and rusty soft and coarse sediments on the sulphide mound. This data, together with a wealth of samples taken around the seamount, will greatly contribute to the data collected in 2014 and help us understand the processes driving the communities on the Aurora seamount, from viruses and microbes to the sponges that thrive in this region.

The scientific institutions represented on the cruise had a focus on life in ice-covered oceans, including ecology, micropaleontology, oceanography and geochemistry. But astrobiology was a completely new topic for many of us. Together with UiT, National Geographic and Avatar Alliance Foundation, the NASA-JPL team took ice-core samples to investigate if biogeochemical signatures and microbes from the Aurora vent field might be found in the overlying ice. The results will contribute to the planning of future projects that aim at exploring for life in other frozen oceans, such as the ones found on Europa (Moon of Jupiter) or Encedalus (moon of Saturn).

The HACON cruise was high-risk, and we did have challenges. But it was, without a doubt, a successful cruise with an excellent atmosphere on board (Fig. 5). We already know much more about the Aurora vent field than we did before and as the sample and data analyses progresses in the labs, a fuller picture will emerge of the composition and functioning of this remote and pristine ecosystem.