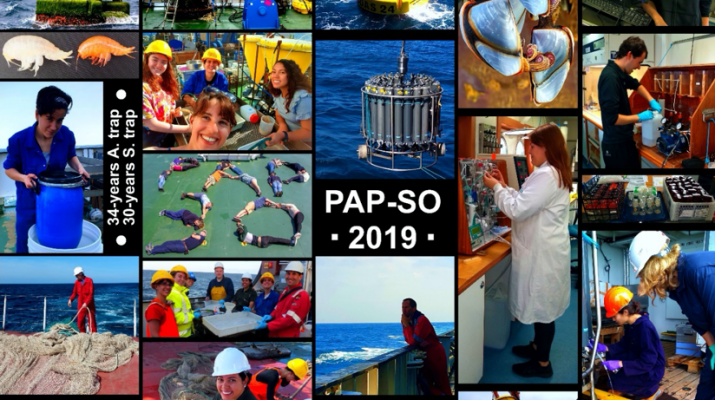 The 31st May 2020 was scheduled to be the departure date for the NOC deepseas team to visit their favourite place in the world – the Porcupine Abyssal Plain Sustained Observatory (PAP-SO). Alas, with the Covid-19 situation, we are landbound. Instead we are finalising a revisit to the site in print, with a Special Issue of Progress in Oceanography. The planned 2020 cruise, onboard RRS Discovery IV, would have been number 38 in the 36-year history. That history that has called on several other vessels: FS Meteor, FS Poseidon, RRS Challenger, RRS Charles Darwin, RRS Discovery III, RRS James Clark Ross, RRS James Cook, and RV Celtic Explorer.

The story began with RRS Challenger cruise 6A/85, led by Mike Thurston (NOC Visiting Fellow), arriving at position 48° 50´ N 016° 30´ W, water depth 4850 m, at 22:00 UTC 22 June 1985. They collected its first successful sample – via an experimental amphipod trap system – the following morning. This early benthic work has now expanded to gathering time-series data about the surface ocean, and the fate of carbon at the site.

Broad European collaboration at the site began with FS Meteor cruise 6 – 7A/B, in May 1988, led by Olaf Pfannkuche (then Institut für Hydrobiologie und Fischereiwissenschaft, Universität Hamburg). This was a European (Economic) Community twinning project between the Institute of Oceanographic Sciences (now NOC), the universities of Hamburg, Belfast and Lisbon, and University College, Galway. European collaboration at the PAP-SO site has been more-or-less continuous since then: MAST I, MAST II, BENGAL, ALIPOR, MarBEF, HERMIONE, ANIMATE, FixO3, and currently EMSOLink, iAtlantic, and contributions to European Research Infrastructure Consortia as an EMSO Regional Facility and an ICOS fixed ocean station. Another major collaboration has been with the Station M abyssal time-series site in the eastern Pacific, maintained by MBARI, which has also recently celebrated a milestone with a special issue (see here). Wider international collaboration at the PAP-SO site has included the Joint Global Ocean Flux Study (JGOFS), the Census of Marine Life field project on the Census of the Diversity of Abyssal Marine Life (CeDAMar), OceanSITES (worldwide system of long-term, open-ocean, reference stations), and the Partnership for Observation of the Global Ocean (POGO). Our 2020 cruise to the PAP-SO should have involved a link-up with the US EXport Processes in the Ocean from Remote Sensing (EXPORTS) NASA and NSF funded programme.

Many of you may have been to the PAP-SO site, as the cruises have provided training experiences to many young researchers. We were particularly sorry to have had to disappoint our POGO and CLASS Fellowship applicants this year – the next generation of Porcupine-ites. We all hope that these ventures will soon start again in the field, and for the moment we will keep going in print.